Why do Christians think that when a man says “I’m an atheist” that he doesn’t mean it? How can it be made clear that nonbelief in a deity or the supernatural is not an invitation for proselytizing? I realize these people might actually believe they are being kind and are possibly even serious about saving my non-existent soul. But enough is enough. 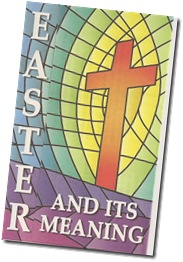 Just before Christmas last year I received a packet of brimstone, fire-belching Christian tracts which I displayed on a past blog. On Wednesday March 20, 2013, I received yet another packet, just in time for Easter. The perpetrator whoever he or she might be does not even have the courage or decency to include a return address.

Perhaps they think it is an amusing game. Perhaps they think they will rile me into accepting their lord and savior. I do find it amusing, to think that there are people who still believe in this crap. What year is it? 2013? Yet they live so far in the past holding to concepts written by bronze age know nothings.

So…who could it be? It’s stamped from the Cleveland post office here in Ohio, whereas, our local mail is supposed to go through Akron. That seems to eliminate my one suspect, one I will call Tim. He’s a baptist, but is otherwise is a fairly intelligent fellow. I think he would know better. That leaves an unknown.

Well, at least these tracts won’t land in the hands of someone who has not been inoculated against the god virus. There’s always a good side to everything.

This entry was posted in Comedy, religious comedy and tagged Cowardly Christian. Bookmark the permalink.