A recent presentation by Bill Maher asked the question: “If there was one turd in the

swimming pool, would you jump in?” This question was made in reference to the Bible. Taking this further, what if the swimming pool had many turds, so many that you had to wait for an area to clear, just to jump in?

Maher’s guest was an evangelical minister who insisted on seeing only the cherries. Whenever Maher asked about the negative, the bad ideas, the ‘dirt’ in the Bible, the minister either changed the subject or answered with a question.

Many Christians do this. They refuse to see the bad parts and use the good parts, only the good parts they want, to create a religious view unique to themselves and having

nothing to do with the Christianity presented by the Bible. They do this by ignoring the obvious immoral things while choosing the good.  Many a sect of Christianity has developed by embracing certain ideas in the Bible and rejecting others.

In the past the analogy I was given was that it was not proper to reject a whole book or body of work simply because you disagreed with one page. However, there are so many objectionable pages contained in the Bible that a very large portion of the book would have to be rejected. In the end you end up with moral concepts which existed long before the Bible came to be. If you can obtain these morals without the use of a book that also contains the immoral, why taint the goal.

Despite the admonition by theists that God is the same, never changing, it is clear that at least in the eyes of some that this is not true. Christianity has changed to reflect the morals of society as they change over time. It has morphed into something that has very little in common with the Bible as well as ancient Christianity. The ideal concept of 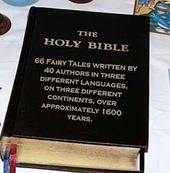 a Christian held by many, unique in every instance, does not in reality find its reflection in the Bible. If anyone holds that the Bible is the inspired and perfect word of God then they do not realize that when they condemn others for not following its teachings, they are condemning themselves as well. In other words, they are as damned as everyone they condemn.

In many ways the changes Christianity has undergone to reflect the morals of the time is a good thing. If they followed the teachings as originally taught there would be even greater numbers of Christians in prison today. The asylums would be full of them as well. Education of the masses is the key to this rejection of ignorance represented by biblical scripture.

This entry was posted in Religion and Reason and tagged Christianity, morality came before religion, Turd in the pool. Bookmark the permalink.