So, you are sitting there… you know that so and so is a violation of the

Constitution of the United States, but… how is this violation going to be corrected? You look around in your apartment. Nope, no bags of money lying about. You check your most recent statement from the bank. Nope, just barely enough to get by till your next paycheck. There you sit, aware of a blatant constitutional violation, but you are broke.

You must sue. To correct a malady, an infraction, an error, you must sue.

You, have to hire a lawyer, you, must come up with the cash. Why… if you didn’t know better you would think that our judicial system was set up solely for the rich.

This is no doubt not the biggest flaw in the American system, but it’s a big one. Not only is your health dependent on how much money you have, but so is justice. 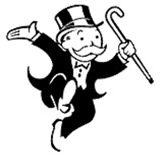 As I recall, the rich have that money thing cornered.

The rich can buy the best lawyer, or at least the best performing, which is what seems to matter. Justice, after all, should be cut and dried, but many a slick lawyer has proven, it isn’t.

Oh, and the juries, the juries that listen to all this stuff. Supposedly representing myriad perspectives, it’s those perspectives that sometimes can be utilized by a slick lawyer to bring a case to a conclusion a distinct distance from anyplace called justice. Even if the lawyer doesn’t play to those views, the outcome of the case

can be flawed due to them. Cut and dried, right or wrong, legal or illegal, doesn’t really have a chance here either. A jury of your peers… really quite impossible. Such peers, one might think, would also skew the case and render you a positive outcome that wasn’t deserved. I wonder how many juries have been bribed?

Shouldn’t justice be free? Shouldn’t the common man be able to point at the Constitution and demand a wrong be righted? Instead, what matters, is who has the most cash to spend.

What if Mrs. McCollum did not receive financial backing for her quest in 1948? Would we all now be kneeling and praying in our schools? She won, but what if…

This entry was posted in Law and order, Morality, Reason, Religion and Reason and tagged justice should be free. Bookmark the permalink.