The boogeyman, that nasty creature lurking under your bed, in your closet, or forever in the recesses of your mind. Something out to get you. People conspiring to put an end to your existence by one means or another. Nature 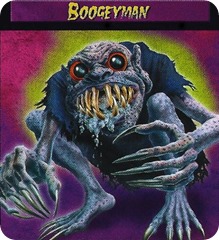 itself rearing up as if somehow endowed with intelligence, a malevolent presence bent on your demise.

Conspiracy nuts abound. Never satisfied with the status quo, these people are constantly at work developing new fears, new worries, to make you afraid, very afraid. From big business to big government to the extraterrestrial, there are entities out to eliminate your existence or enslave your mind and body.

Unable to accept that Islamic terrorists were capable of bringing down two buildings in New York using gigantic airliners these conspiracy inventors, fabricators, would rather believe, and have you do likewise, that it was all a

government plot. That men lurking within the government decided it was time to kill 3000 Americans just to persuade us Islam was out to get us. Rather than actually believe that terrorists, under the cloak of Islam, really were out to get us, they would have us believe it is the government, our very own, plotting against

This conspiracy is just the latest one. Throughout time there have been people pointing fingers in the dark at boogeymen. There have always been individuals who create undue fear through lies. The McCarthy era should have taught us to be more careful before we point the

finger. People never learn. For each new bandwagon of alarm there are many boarders. No one, it seems, has developed the habit of stepping back and saying “Now, hold on a second.”

This entry was posted in Reason and tagged common sense, Conspiracies, Conspiracy theories. Bookmark the permalink.