pull the load of society is diminished there is always that excessively liberal person that crawls out of the woodwork and exclaims “What is normal?”

Although it would be easy for me to list those people whom I think are abnormal and dangerous to society, there will always be those who think so and so should not be on that list, or that they themselves should be thought of as normal… when it is obvious they are not.

In my opinion, the nuclear family, that is, a family group that consists only of father, mother,

The nuclear family has been the strength of the United States. This was the foundation of our nation. Our nation

has lost strength and world prestige in direct proportion to the deterioration of the nuclear family. When that proportion of the population that is traditional nuclear family declines below a critical level, and I do not pretend to know what that level is, the nation will fall. Structure, in manufacturing, in civil society, will crumble and fall into disarray… chaos and misery will follow. The only reason we remain today is that there are still enough traditional families teaching their children in the right way to go.

You see evidence all around you of the increasing decay of society. An increased desire and

an increased use of “recreational” drugs. More interest in the dark areas of humanity like pornography, loose sex, and perversions. More and more people who depend upon public handouts rather than a day’s work.

You see men and women no longer sure of who they are, so they try to be

something they are not. Men try to transform themselves into women, women, into men. It is a stomach turning thing to behold. Yet, the moment you cry out against it there are those people, already influenced by it, that staunchly stand up and shout “who the hell are you to tell us how we have to be”, so the acceleration into decadence continues.

I am an atheist. I have not dispensed with morality. My morality was here 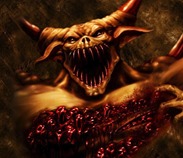 long before my excursions into Christianity. My morals remain now, even after my discarding of faith. My simple hope now is this, and perhaps it is a greedy hope, and that is, that civilization lasts at least long enough so that I will live to old age and die before society becomes so sickening that even a demon would convulse upon seeing it.

This entry was posted in Morality, Reason and tagged What is normal?. Bookmark the permalink.