In the not too distant past the United States was considered the technological envy of the world. Maybe it still is. Nevertheless, due to people that believe much as those who lived in the 1200s, our technological lead can not last for long.

something as simple as “he/she is recovering much better than we expected”, naturally this is due to some deity in the

background rather than the skills of the physician. This simple-minded belief sickens me to no end.

This drift backward to ignorance is, more than anything, caused by the perpetuation 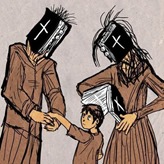 of belief instilled in the children of believers. In the name of freedom of religion we allow the perpetual dumbing down of the population. People praying for relief from societies ills results in the continuation of these failings and the eventual magnification of them as no real action is taken to alleviate them. Despite the fact that praying to a deity is no more efficacious than praying to a statue, a rock, or even a plastic spoon, people continue to engage in these activities. When they do so they think they are actually doing something when in reality, nothing gets done. Religion paralyses people into inaction. Actions and remedies that might have solved problems is not taken when the preferred action is to pray and wait for relief instead.

I have nothing in common with the sort of people who will credit a deity instead of their physicians skill for their recovery. Furthermore, I neither desire contact with these

“Oh, but Mr. Freethinker, this type of belief provides people with comfort in the time of need.” Do we really need the type of comfort that instills a sense of complacency and well-being when things are simply not well at all? Don’t we instead need the motivation that would cause people to spring into action? Wouldn’t it be better to be a little worried, a little distraught, and do something about it rather than sit back in a chair and take a sip of coffee and a bite of donut assured in the knowledge that a god will make things better? Or is that a little too mature for you?

Prayer is an excuse, an excuse for doing nothing instead of something. Prayer is no better than sticking a pin in a doll, mixing a bunch of inert ingredients in a pot expecting some potion of a healing nature to develop, and certainly no better than reciting an incantation from an old and useless tome. In fact, it is the same thing.

I want nothing to do with these sort of people. I look upon such “well-meaning”

people with utter disdain. These are the people who are responsible for the stunted nature of human technological development. Whereas we should in this century have bases on other celestial objects, perhaps even have left the solar system, instead we are headed back to bloodletting, leaches, and faith-based initiatives.

This entry was posted in Religion and Reason and tagged Dark Ages, dumbing down, faith is not a virtue. Bookmark the permalink.

1 Response to The Inevitable Decline of a Nation … February 3, 2014