I received a package this morning, out of the blue. I don’t remember ordering anything, wasn’t expecting anything. I am hesitant to open it,  its source and contents unknown.

My curiosity is growing, the box on my kitchen table remains unopened. I am going to open it today.

Methinks that this box is not supposed to have come here. Inside I discover a smaller box containing a small machine. It looks like some sort of insect, a fly, I think. Another envelope contains some sort of wiring and a thin membrane of plastic. No instructions.

Wow. I think I’ve figured this thing out. The membrane fits on my glasses almost to a T. When I plugged the small platform into the wall socket, the tiny bug seated itself on it. It must be a charging station. I have found that the bug operates with the slightest eye movements when I wear the glasses. This is incredible. 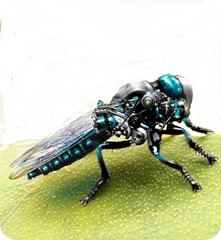 Decided to take my little friend out for a spin. I have found that it has audio capability that feeds into the tiny hearing aid type receiver that came with it. This will be a hoot!

Unknown to Larry Bizzecki and his new found toy, members of the cabinet of Homeland Security are frantically searching for the whereabouts of their tiny surveillance mechanism. The company that produced the machine mistakenly shipped it in the public mail system rather than by courier. Inadvertently they also added the wrong zip code. The rest of the address being similar to Larry’s address, and the postal carrier’s eyesight diminished by age, the package ended up in Larry’s care.

Lunch with friends, always a nice occasion. Mike and Bob have always been good friends of Larry’s acquaint. As Larry seats himself Mike and Bob do not notice the transparent membrane attached to Larry’s right eye glass, neither do they note Larry’s unusual eye movements as he controls the robotic fly to a position on the back of Bob’s chair.

Cordial greetings go round the table. Menus are observed, selections made.

Larry makes his way to the restroom all the while listening intently to his two friends via the wonders of modern technology.

“When are you going to make that proposal to him?” starts Bob, as Larry listens.

“I’m not sure he will buy it. He may be smarter than he looks.” answers Mike. “If he does we can pack our bags and head out to parts unknown with plenty of cash, his cash.”

“I really hate doing this to him,” Bob interjects, “After all, he has been our friend for years.”

“Yea, but not that good of one. He’s always a downer.” Mike responds.

Meanwhile a black limousine streaks through the streets of downtown Boston. Inside two agents of Homeland Security, sweat on brow, travel hastily to the location where they have tracked the signal emitting from the insect machine.

“The best we can hope for,” speaks one of the agents, “is to arrive before the worst happens. That thing isn’t nicknamed the assassin bug for nothing.”

Larry, listening to his friends discuss their nefarious plan, grows more and more angry. His eyes begin to dart frantically back and forth, oblivious to the transparent screens new readout appearing. A countdown has begun.

Outside in the busy coffeehouse his friends turn at the sound of scurrying feet and see two suits and ties headed their way.

Then downtown Boston shakes with the fury resulting from an explosion very much out of proportion to its source. The coffeehouse, its contents, the people, are obliterated. People outside in the street brought to a standstill, cars, trucks, all manner of vehicles immobilized with windshields cracked or blown out. Sirens begin in the distance.

Larry, protected by the restroom walls, built to withstand both storms and 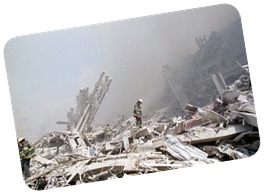 earthquakes, yet even so, must crawl out from beneath the debris.

The next time you wish you were a fly on the wall, stop and consider, you may not like what you may hear.

This entry was posted in Musings and tagged Fly on the Wall, The Walls have Ears. Bookmark the permalink.