A Form of Fascism …

Were the Nazis fascist? Many consider Nazism to be a form of fascism. This is my opinion also.

If you examine radical feminism you see parallels with the form of fascism called Nazism. There is book-burning, censorship, scapegoating, a fake religious state, enforcement of homogeneity of thought and appearance.

Fascist ideology asserts a superior people, in the case of feminism, it is women superior to men. At the same time, these superior people are depicted as being oppressed. To attain their goal, feminism must portray women as 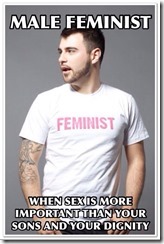 helpless passive victims of male oppression. Victimhood becomes a way of life, a way of obtaining every goal.

Many men, seeking sexual reward, support these feminist fascists and attempt to wear the label feminist as a road to that goal not quite realizing that those they pursue hold them in great contempt. As soon as these pseudo-men are of no use to these fascists they will be cast out along with the week’s garbage.

Although all feminism is mental poison, at least it seems the radicals are dying out. With luck these fascists will soon be gone. Unfortunately, today’s feminists, who claim to be only seeking equality, not realizing that was achieved in the 60s, have yet to denounce these inhuman old hags of feminism and instead glorify them. Having not rejected the inhuman nature of radical feminism they taint the entirety of their movement and paint themselves with the same brush the radicals used. Indeed, how can anyone not hate their oppressors? If feminism is based upon suppression by a patriarchy, men, then feminists must all be man-haters, and feminism is a hate group.

This entry was posted in Feminsim(Stinkin'), Morality and tagged Fascist feminism. Bookmark the permalink.