War… nobody wants war, yet there 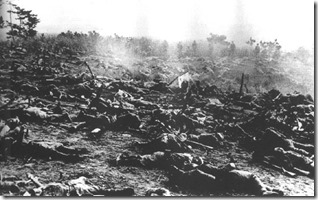 are so many wars. If nobody wants it how come it keeps cropping up? Such cruelty from a species that possesses such capacity for empathy… there seems some disconnect. The malady of humans is the result of millions of years of evolution. The primitive drives are never left behind but carried forward despite each advance towards higher intellectual level. Each creature is driven to struggle to attain resources and space so as to provide for subsequent generations and never-ending growth. No human is innocent in this natural process. Just like rats that fight viciously with one another when population is high, so humans cannot resist the primitive urge to seek space.

The greatest tragedy of humanity is it knows… it knows what should be done, it knows who suffers, it knows the solutions, but does not act. Granted there are those that speak loudly of the tragedies of humanity, even offer solutions. They are not numerous enough, influential enough, to make much of a difference. The little good that is done is wiped away, as if it never existed, by the next self-induced calamity. In the end, the question that seems to matter to most is “What’s in it for me?”.

It seems that the human capacity for empathy is easily exceeded by avarice, by envy, by desire. We see the man starving on the sidewalk but remain reluctant to forgo one meal today so that he might eat once in three days. We read of a family in our newspaper that had their home destroyed by fire.They have no where to go and a number is listed for contributions. No, the lottery we play each week is more important, and besides, no one knows I don’t care… perhaps I didn’t see the article after all. The conscience of the average human must be light indeed, to be so easily swept aside.

I admit I am that average human… I care but do not act. I could give more, do more, but then… what’s in it for me? Would they reach out and help me when I’m in need? I have already in my many years seen that the answer to that question is a negative. So I am no better it seems in this regard, but I do care.

This entry was posted in Morality, Social morality and tagged Humans inhumane. Bookmark the permalink.