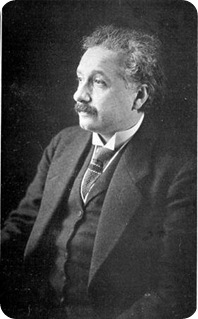 During his life Einstein’s religious leanings were never clear. Many of his quotes seemed to support a bend toward spirituality. His famous quote, “God does not play dice with the universe” is taken as evidence of his religious belief.

“I believe in Spinoza’s God who reveals himself in the orderly harmony of what exists, not in a God who concerns himself with the fates and actions of human beings,” he once said.

Spinoza defines “God” as a singular self-subsistent substance, and both matter and thought as attributes of such. There is much controversy as to what was meant by this, some claiming it was a pantheistic belief, others claiming it almost entirely materialistic.

In my own opinion the reason Einstein spoke in religious references so often is the same as every person living in America and Europe.
Religious gibberish permeates the languages of these areas and is used in many common instances without realizing their nature. People say “Oh my God” over the most innocuous occurrences, and “Thank God” in instances when God is the furthest thing from their minds. “Oh my Gosh” would serve as well in the first instance, and “Thank Goodness” in the second. In both cases actual belief in an entity is not inferred in the actual sense as these phrases are used as simple exclamations in the appropriate instances. Yet, there are some of the fervently religious persuasion to whom such innocent mouthing’s become faith incarnate.

Here I present excerpts from a letter Einstein wrote to  Eric B. Gutkind, on January 3, 1954, a year before Einstein’s death. These quotes should serve to clear up Einstein’s view of religion, and his stance. Of course there will still be those who because of their agendas will still claim the genius was in their religious camp, but this does not change the truth: Einstein was an atheist.

“For me, the word God is nothing more than the expression and product of human weaknesses, the Bible a collection of honourable but still exceedingly primitive legends. No interpretation, however subtle, could change that (for me).’’

“For me, the unadulterated Jewish religion, like all other religions, is an incarnation of primitive superstition.”

This entry was posted in Religion and Reason and tagged Atheist, Einstein. Bookmark the permalink.