Washing That Reason Right Out of Your Head (Brain)

That queasy feeling in your stomach might not be that eggroll you just ate, it could be the contamination in your eyes, or an inflammation of your brain after being exposed to an extreme level of ignorance.

Our group arrived at the Creation Museum around 12:30 p.m. on Saturday, September 29, 2012.  The “fun” started before we even entered the Museum. A young lady assisted us by taking the above picture using my Kodak Z712. 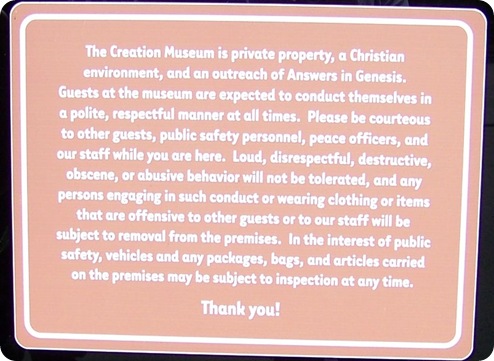 Despite the lack of a clear invitation, we entered and embarked upon our tour of the facilities.

One thing that was apparent immediately is that the museum was oriented towards appealing to children. Children like animals. There were many displays featuring animals throughout the museum. From Dinosaurs to Wooly Mammoths and on to many contemporary creatures, animals were a major part of a number of exhibits. 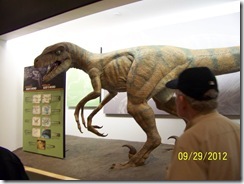 At first I was surprised by the presentation of scientific data along with the Creationist dogma.

If you were trying to get a different viewpoint into the schools, one which is resisted by scientists, what better way than present it as simply another way to look at things.

Upon examination it was clear that actual scientific material was being presented as being only of human origin, which could not compare with the Creationist viewpoint, that of the Bible.

Many exhibits were of similar fabrication. It was an obvious attempt to legitimize creationist dogma by presenting the scientific data alongside, yet at the same time indicating, very clearly, that the creationist material  was superior (Being of God, rather than lowly sinful man). The exhibits later in the tour of the museum presented the Creationist Dogma while at the same time presenting feeble reasoning as to why the scientific explanations were wrong.

The flavor of a number of exhibits were very much similar to the sign above, attempting to assert that science simply is wrong, and that an ancient book written by bronze age authors is correct. Many exhibits caused great discomfort for me, as my stomach turned several times.

There were some displays adorned with signs like the this: 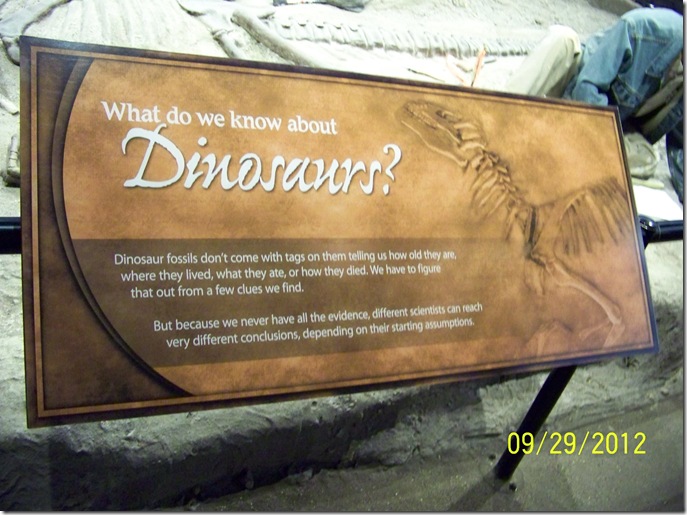 Note how it raises doubt about legitimate scientific research and elevates, clandestinely, the level of alternative (although be it pseudo-)scientific research. This is one of the main objectives of Intelligent Design proponents, that is, to present the intelligent design concepts as alternatives, and to pressure school boards to insert it into the school curriculum. It is an attempt to present Intelligent Design as science equal to that presented in the public schools.

No Bible prophecies have been fulfilled, archeology has repeatedly refuted and debunked Bible assertions, the Dead Sea Scrolls only contain Old Testament some of which is not in the Hebrew Old Testament and only in Christian Old Testament (The scrolls are in fragments, in several languages, and on Papyrus, parchment, and other), and the authors of the Bible contradict each other in many of their scriptures.

We mustn’t forget Noah, and how he saved all the creatures in that small but mighty Ark. 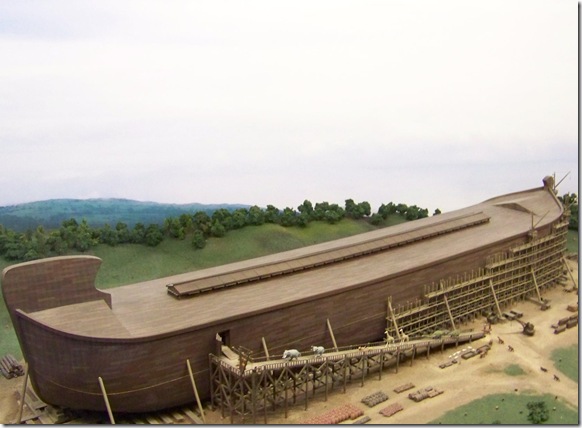 Look closely on the ramp, what do you see?

Wow! Dinosaurs, on the ramp, entering the Ark. They survived! Where are they today? Of course, they perished later on, leaving the many fossils we see today. 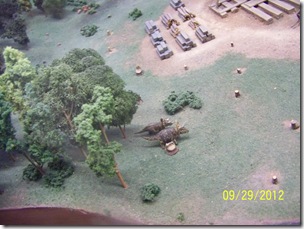 <Triceratops on its way to be saved. 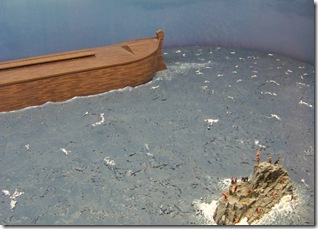 People and animals being abandoned by the pure and noble Noah. What a lovely bedtime story for the kiddies!

Dinosaurs and animals depicted within the Ark.^

Towards the end the appeals to emotion continued. If God is dead… 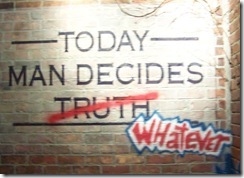 Murder, destruction, immoral behavior, everything that a Christian might find offensive, is the result of abandoning the Bible, of course.

As our tour drew to a close, resisting a hostesses’ call to watch some sort of presentation, which we “just must see”, we proceeded to the main gift store on the floor above. There we found numerous Creationist authors’ work on display for purchase. Ken Ham’s books were prominently featured along with anyone else’s you can think of, where Creationism or Intelligent Design is concerned.

Funding for the Museum came from Answers in Genesis. The Museum opened in May 28, 2007. Its cost is said to have been $27 million. Presently another park, tentatively called Ark Encounter, is in the works.

I sincerely hope that this museum does not win the battle for children’s minds. It is obviously geared toward children and has every bit a Sunday school atmosphere. Whereas actual truth is presented alongside the myth, it is also denigrated as being of only human origin. I am fearful about the fate of America’s future in that this type of ignorance can be presented with such an air of seriousness. That a governor of a state, even in desperation to manufacture jobs, would offer tax incentives to such an endeavor, makes me feel ashamed.

This entry was posted in Religion and Reason and tagged abandonment of reason, Brain death. Bookmark the permalink.